Olivia Hancinsky – Charette, our classical/Broadway voice student has been taking classes with Ms. Martina Oslejskova for about a year and a half. After making a great improvement in classical/Broadway voice technique she won a voice competition Elite High School Honors Performance. 10,000 nominations were made and only 500 students were selected to perform in three categories; classical orchestra, jazz band and choir. Olivia was selected as a soprano. Olivia is learning six songs, one in Russian and one in Yiddish, and also working on a solo piece that she will audition for once in New York. This concert will take place on February 9, 2014 at Carnegie Hall, New York.

Congratulations to Olivia, Ms. Martina, Olivia’s family and all the supporting team! 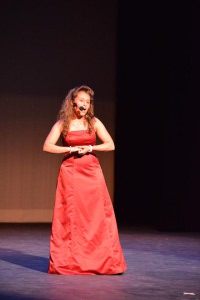 Tell us about your Carnegie Hall competition
My music teacher, Ms. Stephanie Schumer, from The Study nominated me for the Elite High School Honors Performance Series competition as I had won the Maestro award last year at the Heritage Fair for my clarinet solo. Instead of auditioning on the clarinet, which I had played for less than one year I found out that I could audition for voice as well as another instrument. So I sent in two audition recordings, one voice and one alto sax, but I made it clear that I would much prefer to be accepted on voice than sax.

How would you describe your voice preparation for this audition?
For this audition I practiced everyday for one hour (30min technique/ 30min arias) and listened to the songs on my ipod daily. I also took extended voice lessons. An hour class was not enough. It was great practicing the Phantom of the Opera song. I love singing Broadway hits. I really enjoyed learning an Italian aria Batti, Batti from Mozart’s Don Giovanni, it’s completely different singing in another language.

When did you first start singing?
I’m told that I’ve been singing every day since I’m 2 years old. I drove my family nuts at some point! I started nursery rhymes as of 2 years old, followed by Disney movie songs as of 3. Because I already played the piano I started experimenting and harmonizing as of 6 or 7. Then when I was 8, the “official” voice lessons began.

What did your family/friends/teachers do to encourage you?
My parents often played Glenn Miller, Big Band, Swing type songs along with Billie Holiday, Ella Fitzgerald, Aretha Franklin. My family always let me sing my little heart out. I’ve been performing in front of many audiences both big and small since I’m about 8 years old. At first I was stiff as a board, no smile and no eye contact, but over the years and help with coaching and teachers I’ve learned to loosen up and realize that I really love what I do and I shouldn’t be ashamed or intimidated by anyone in the audience. If they don’t like it then they can always leave; however, if they do enjoy it then we get to share our mutual joy in music. I’ve been a member of the JazzKidz band playing the alto and tenor saxophone and of course singing as well.

Where would you most like to perform?
La Scala and/or Broadway!